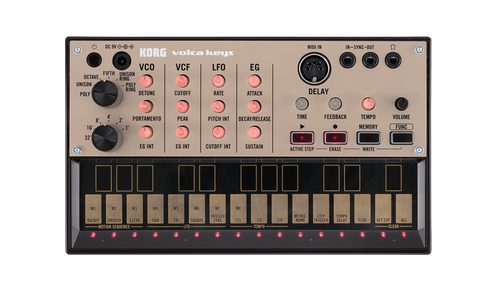 The ideal introductory synthesizer, with a simple – yet powerful – polyphonic analog sound engine and loop sequencer

Volca Keys is a long-awaited synthesizer that adds a new chapter to the long and storied history of Korg's analog synthesizers. Volca keys is a 27-key analog lead synth that generates unbelievably powerful sound from its compact body. Starting with a filter section that uses the circuitry of the legendary miniKORG700S (1974), it delivers astonishing sound that takes full advantage of Korg's half-century of know-how in circuit design.
With a simple structure that includes delay effect and a sequencer, it's also an ideal choice as a first analog synth. It offers the richly expressive sounds that are distinctive of an analog synth, providing the enjoyment of simple yet deep sound-creation.