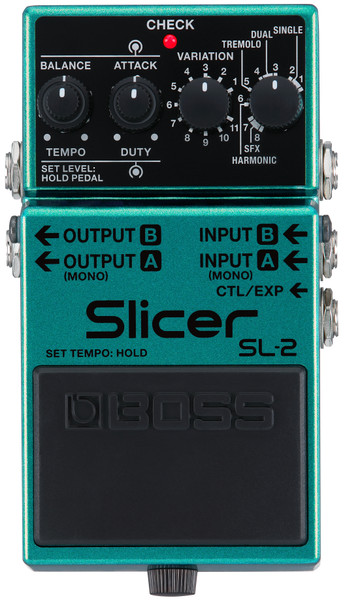 BOSS calls the SL-2 Slicer an “Audio Pattern Processor” pedal, but the truth is that this little box simply defies categorization! The SL-2 packs the power of BOSS’ original SL-20 pedal into a much more pedalboard-friendly form factor, allowing you to chop, screw, and twist your signal into complex rhythms and percussive grooves. There are 11 distinctive rhythms at your disposal, and the tempo can be set either by the control knob or by activating the hands-free tap tempo feature. What’s more, the Type knob provides five different flavors of slice — single, dual, tremolo, harmonic, and SFX — that are a cut above traditional tremolo tones! Finally, the SL-2 is packed full of high-end features, including MIDI in, expression/control in, stereo I/O, and a dedicated BOSS app to access even more pattern possibilities.

Five different ways to slice it

What is slice, anyway? The closest equivalent in the pedal world would be tremolo, but tremolo sounds positively quaint compared to the SL-2’s wild rhythmic gating. Still, the SL-2 Slicer covers those classic choppy tones, but its five different slice options can also transform your signal into an IDM groove or even synth-like sounds.