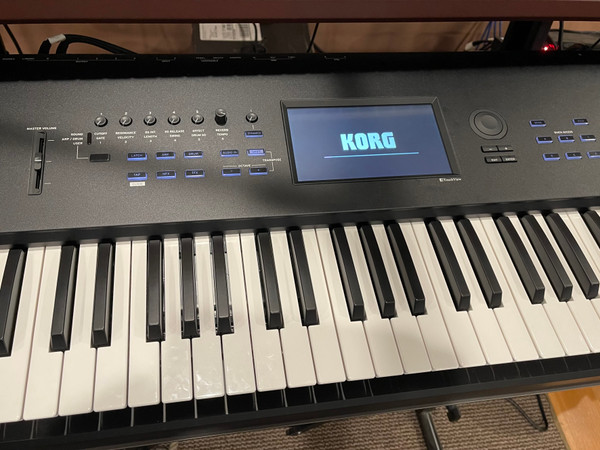 Fortified with nine powerful sound engines — each optimized for a specific task — the Korg NAUTILUS pushes the performance envelope for synth workstations. Leveraging Korg’s latest cutting-edge technology, NAUTILUS advances the state of the art with its robust feature set, which gives you fingertip access to a massive arsenal of premium sounds, full-featured sampling and HD audio recording, studio-grade effects, and stunning processing power — all harmoniously integrated into a sleek, robust chassis that’s easy to transport and looks incredible onstage. Korg KRONOS set the standard for the modern, multi-engine music workstation. Now, NAUTILUS gives keyboardists the sonic capabilities of KRONOS, with an even larger soundset, in a streamlined, more affordable Japanese-built performance synth workstation.

Achieve your musical goals faster than ever

NAUTILUS redefines the capabilities — and indeed, the very notion — of the performance synth and keyboard workstation. Its nine sound engines, working fluidly in tandem, further advance the refined multi-engine architecture Korg first pioneered in KRONOS, while their Dynamic Polyphony Allocation and Smooth Sound Transition technology ensure all your notes are voiced and your sound transitions are seamless. Factor in NAUTILUS’s TouchView interface and control panel with customizable mode buttons, and “workflow” becomes a quaint concept supplanted by intuitive, stream-of-consciousness creativity that allows you to achieve your musical goals faster than ever, and in any manner you choose.

NAUTILUS harnesses the awesome power of nine individual synth/sound engines and integrates them into a single musical instrument that offers you unlimited creative potential. Korg uses advanced technologies such as dynamic voice allocation to allow all the sound engines to gracefully share the stable, enhanced hardware platform that is NAUTILUS. In operation, the results are nothing less than jaw-dropping. Whether you’re a performing keyboardist, songwriter, or producer, NAUTILUS is a formidable instrument for delivering your musical message.

An arsenal of dazzling sounds and studio-grade FX

As much as computer-based DAWs have made inroads into keyboardists’ stage setups, gigging pros at know that from a live performance perspective, a DAW-based rig is no substitute for a roadworthy, self-contained synth workstation that interfaces seamlessly with your DAW for composing and recording in the studio — while delivering a wealth of instantly accessible sounds and powerful features with the immediacy of real-time, hands-on control during live shows. Boasting up to 14 simultaneous effects and 32 simultaneous EQs, NAUTILUS has the standalone production power you need to create finished tracks with professional studio polish.

Korg invented the keyboard workstation in 1988 and has remained an industry leader in the category ever since. Along the way, they have continually refined and integrated proprietary digital, analog, processing, and hardware technologies into instruments in which they remain virtually invisible, working smoothly under the hood to let you connect with your music on an almost subconscious level. With NAUTILUS, Korg has distilled technology from their flagship KRONOS — the instrument of choice for world-class keyboard stars like Herbie Hancock, Jordan Rudess, and Jon Batiste — into a streamlined synth workstation that puts a cornucopia of 2,200 dazzling sounds at your fingertips, along with the means to quickly select, modify, and arrange them to satisfy your every creative whim. NAUTILUS even expands on the power and flexibility of KRONOS with expansions for both the PCM and Piano engines, resulting in an even more robust soundset. With NAUTILUS, you will never run out of amazing sounds!

The keyboard of your dreams

NAUTILUS is available with three different keybeds to suit a range of keyboardists’ preferences. NAUTILUS 88 features Korg’s acclaimed premium RH-3 (Real Hammer) action, which is evenly graded to feel heavier in the low register and lighter in the high range, like a real acoustic grand piano. For players who don’t want or need weighted hammer action, Korg has developed a new Light-Touch keyboard that facilitates smooth glissandos and lightning-fast synth solos. Organ and synth players at are raving about the Light-Touch keybed, which is available in NAUTILUS 61 and, by popular demand, NAUTILUS 73 — which gives you six full octaves, C to C.

While the 88-key model is fitted with sumptuous wooden end panels, the 61-key and 73-key models feature a sleek new chassis with swoopy curves that rise up from the bottom to the sides, conjuring the maritime design inspiration behind NAUTILUS. It all adds up to an elegant, yet tour-tough instrument that looks as good as it sounds.

Pianos are the bedrock of most keyboardists’ soundsets, and NAUTILUS features the largest number of advanced piano libraries ever contained in one product. Not only is NAUTILUS fortified with all the gorgeous grands and uprights from KRONOS and Grandstage, but it also features an updated version of Korg’s SGX-2 piano sound generator, which leverages 12-step velocity switching, sympathetic string resonance, variable ambience, and more to bring out the nuanced expressiveness of your acoustic piano performances. From the mellifluous tones of a legendary German piano to the thrilling sounds of a famous Italian grand, Korg’s SGX-2 piano engine delivers a level of detail that captures every delicate nuance of these intricate instruments.

Korg’s renowned EP-1 electric piano sound generator reproduces seven classic electric piano sounds with stunning realism, while the CX-3 engine — the heart of Korg’s coveted CX-3 reissue — serves up the distinctive sound of legendary tonewheel organs. Add to that MOD-7 VPM/FM synthesis; the PolysixEX, MS-20EX, and AL-1 for analog modeling; and the STR-1 for physical modeling, and you have a dedicated engine for any type of sound you’re looking for. Deployed together in Program or Combination mode, these distinctive sound engines create entirely new timbres.

The most powerful sound engine in Korg’s history, the HD-1 High Definition PCM sound engine is built on Korg’s proprietary low-aliasing sample playback oscillators and features full-bandwidth multimode resonant filters and fast, smooth envelopes and LFOs for flexible signal modulation. Acclaimed industry-wide, Korg’s PCM sounds are meticulously crafted by a specialized team. As technology advances, data that was previously omitted due to technical limitations has been drawn back into service for NAUTILUS. While the impressive quantity of waveform memory might be roughly equivalent to a computer-based sound engine, the real difference is in the superior level of quality and finish that become manifest when you play these sounds as instruments on your NAUTILUS.

Sampling to the nth degree

NAUTILUS takes sampling to the next level with out-of-this-world sounds like “Nails Piano,” which combines a piano with chromatically tuned samples of nails being dropped on the floor! Korg’s Open Sampling System lets you quickly sample any external audio source, whether you’re in Program, Combination, or Sequencer mode. You can load custom samples into the user sample bank via USB memory to take advantage of NAUTILUS’s massive 60GB SSD capacity. NAUTILUS supports samples in AIFF, WAV, SoundFont 2.0, and AKAI S1000/3000 formats. What’s more, you can exchange large amounts of sample data with your computer at high speed using a USB Ethernet adapter. And, uniquely, you can use instruments or samples you have created on your Mac or PC as the basis of a NAUTILUS production.

Onboard 16-track MIDI and audio recording

However you choose to go about producing your music, NAUTILUS is ready with a sequencer/recorder that offers 16 MIDI tracks and 16 audio tracks. MIDI sequencing is great for quickly capturing ideas and whipping together professional-quality phrases using the drum track or RPPR (Realtime Pattern Play/Recording) functions. The 16-track audio recorder concurrently captures up to four tracks of uncompressed 16-bit or 24-bit data at a sampling rate of 48kHz. You can play along with recorded tracks, season with effects, and then re-sample NAUTILUS playback and place the re-sampled WAV files directly in a track. Polishing your tracks is easy using mixer automation and editing functions such as copy, paste, and normalize to achieve your desired results.

NAUTILUS provides 16 onboard effects to add impact and finesse to your musical creations. Each of the 12 Insert Effects can be applied to individual or multiple timbres in a combination or to individual or multiple tracks of the sequencer. In addition, two Master Effects may be applied to sends 1 and 2, and two Total Effects can be applied to your full final mix. Plus, a separate 3-band EQ is available for every timbre, for every sequencer track, and for every audio track to adjust tonal balances or for creatively equalizing the overall sound.

NAUTILUS’s Dynamics knob lets you control changes in volume and tone in response to the velocity with which you strike the keys, and you can even customize it in real time to match your playing feel for a particular song. The Dynamics knob is powerful — turning it to the left makes the keyboard respond more softly to your touch when delicate expressiveness is required in solo situations or quiet, small-ensemble settings. Turning it to the right yields a stronger, flatter dynamic response that’s more appropriate for overdubbing in a thick track or playing in a band. The six real-time knobs give you direct control over changes to Prog and Combi sounds. Freely assignable to a number of functions, real-time knobs are ideal for controlling a variety of functions such as filter cutoff, effect depth, gate time, tempo and swing of the arpeggiator or drum track, type of snare drum, and much more.

NAUTILUS’s nerve center is its expansive new 8-inch (800 x 480 pixel) WVGA color TouchView display, which lets you choose a sound with the touch of a finger and gives you deep, intuitive control over every parameter. The display’s Touch-Drag capability means you can, for instance, adjust the lid of a grand piano or connect a patch cable to a semi-modular synth model with just a simple finger swipe! The display also has a convenient Search function, which allows you to search for (and preview) sounds based on their titles. Korg’s TouchView display, together with the real-time knobs, not only integrates, streamlines, and simplifies the operations of a very sophisticated high-tech instrument, but it also puts your creativity front and center at all times. And that, friends, is what it’s all about.